We're on our way to the final cycle of HoN Tour Season 3! The exciting conclusion of the regular season kicks off this weekend, so make sure to check it out. Along with the exciting matches is the debut of HoN Tour Flash Sales, a new system that lets fans save big when the players go big! Let's take a look!

With Sync firmly in first place and on their way to Thailand, the rest of the top teams are scrambling for momentum leading into the playoffs. A win or big showing in Cycle 8 will not only start that momentum, but also score better seeding, and a nice payday from the event's $19,000 prize pool. With exciting match-ups like BMG vs Reason in the first round, there is going to be nothing but awesome matches in store.

The Flash Sale system debuts this weekend, allowing fans to follow along for designated big plays like a steal on the Token of Life, an Annihilation, or a 5 man Tempest hole. Each big play will trigger a Flash Sale, allowing players to save up to 40% on select Avatars. You can find the full list on Hontour.com or the official Forums.

With HoN Tour on hiatus last weekend, the 5v5 Cup #10 stepped in to bring us the FoC action. At the end of the bracket Dishonored fell 0-2 to Diamond Division regulars Prime Icarus, as PI scored Aquarius Bubbles and a ton of Gold Coins!

On the Midwars scene, the Big Bux Money crew were back in force as they scored wins in Midwars Cup #13 and 14. 2-0 wins over XVII Exclusives and Raging BUll show that the team once called the stayGreen of Midwars are back in force! Grimm's Cup #13 wasn't as clean, as the favorites Grimms United were taken down by Coolo, who then went on to take the Finals 2-0 over Zdegree. But the Grimms United squad got their revenge in #14 as they went undefeated to the Finals and scored a 2-0 win over MenWithHandguns. Congrats to all squads!

Be sure to tune in to Honcast and the HoN Community Casters starting at 12pm EST/1800 CET as HoN Tour Cycle 8 kicks off! The coverage continues all weekend long with Upper Bracket Saturday, and Lower Bracket Sunday filling your screens with some awesome HoN action!

We'll catch you next time for another HoN eSports Weekly!

It's a new year, and already the first cycle of HoN Tour has wrapped up! Sync scored their record breaking sixth cycle victory, and have secured first place in the Season 3 standings! With one more cycle to go, teams are fighting for spots in the Playoffs, and getting all the practice they can with the Weekly Cups! Let's dive right in to the action.

The first Diamond Cycle of the new year was also the first in over two years without Lions/BMG, as they were slumming it down in Gold, but there was plenty of talent to fill in. After a narrow 1-2 loss to Sync, newcomers Ride My Rocket fell to Gold, joined by longtime “elevator team” REXXARS. Dawn and Prime Icarus narrowly escaped elimination, and while PI fell to tree in the next round, Dawn took a smooth 2-0 victory over top dogs, Nullstone Gaming. In the second week Willowkeeper proved the better squad with a 2-1 victory over Dawn, and then faced Reason Gaming, who fell from the WB Finals after a close 1-2 series against Sync. In the end it was Reason who needed the rematch, and though Reason fought valiantly, Sync was determined to break the record, and score a 6th cycle victory!

The Gold Division was star studded for Cycle 7, with favorites BMG leading the pack, followed by fellow Diamond regulars Night Raid and Shrek is Love. NR and Ogr met in the 3rd round of the Winner's Bracket, where the Americans fell short, giving Ogre a shot at Diamond once more. On the other side, BMG were blindsided by Coollo (former MOE/WOP), and took a 1-2 loss to fall into the Lower Bracket nice and early. Eventually BMG eliminated Night Raid, ending the American hopeful's dream of Diamond this Season, and BMG made a run through the hard way, taking down Coollo in a revenge match, and a 3-0 sweep to bring home the Grand Finals over Ogr! In the Silver Division Dishonored took down izu 2-0 to bring home the victory and advance to Gold, while newcomers Kuro and Shirolchigo took home the Bronze Division in their first ever HoN Tour Cycle!

Grimm's Cup #12 brought Halfling Warrior Scout to the battlefield, as teams of three squared off in some awesome close-quarters combat. Diamond regulars Nullstone Gaming tried their hand, but were dispatched by Silver Champs, Dishonored, in the semifinals, while Grimm's United made their usual run through the bracket, all the way to the Finals. Here Grimms United proved their valor once more, in what must be their 20th or more tournament victory on the Grimm's map! On the Midwars side of things, more Diamonds made their appearance, with Shrek is Love making it all the way to the semis, before elimination at the hands of the combination squad, XVII Exclusives. On the other side, the multi-time champs Big Bux Money Crew were taken down by the ever-so active Dishonored. In the Grand Finals the Exclusives came out on top, with a 2-0 victory, giving Dishonored Silver in both Weekly Cups, in addition to their Silver Division title. Congrats to all teams!

This week HoN Tour is on break while squads ramp up for the final cycle, and the exciting Playoffs to follow. But fear not, HoN fans! The Weekly Cups are here, and filling in for the Forests of Caldavar action is the 5v5 Cup this Saturday and Sunday! Aquarius Bubbles is on the line for this week's events, so make sure to sign up for Thursday's Midwars Cup #13, Friday's Grimm's Cup #13, or this weekend's 5v5 Cup #10, and get your share of fun, competition, and 30,000 Gold Coins!

See you next time for another HoN eSports Weekly! 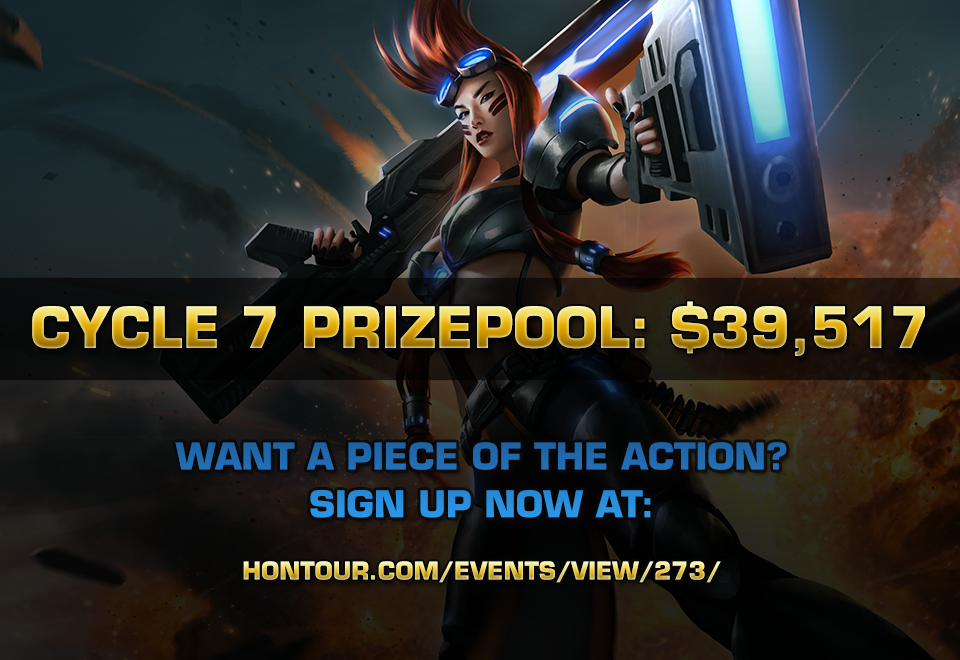 HoN Tour achieves (another) Milestone with $39,517 prize pool
HoN Tour funding for Cycle seven is complete! As a result, the original baseline prize pool of $8,500 USD, has more than quadrupled to nearly $40,000 thanks to URSA CORPs crowdsourcing initiatives, making it the biggest lump of cash up for grab this season.

With another impressive crowdsourcing rally in the books, we encourage you to direct your attention to the newest URSA CORPs content to hit Newerth: Master of Arms Alt Avatar, Mistress of Arms, and URSA Ward. Both pieces are now available and obtainable via eSports Plinko, and as always, a quarter of each sale will be used to fund upcoming cycles.

Thank you for your continued support and good luck to Cycle Seven competitors!